Learning that occur in HayDay

Someone said that it is doubtful whether HayDay really can be used as Game based learning, but well, this is what happens when I use it with my 7 yo daughter.

For you new readers, a summary:
A couple of months ago I started to think what you can learn of HayDay so I come up with some thoughts about it, this post and this post.

So what happened?
During the Christmas holidays my daughter AquaVera started to play HayDay as well. Seven years old, wanted to have an app we could play with together and as I'm HayDay addicted she wanted to see what makes me play it.

When she earlier hijacked my game she had used both all my diamonds as gold to buy stuff. Suddenly with an own game she starts to be careful how to spend her cash and she also saves the diamonds to something special. She also starts to learn you can't buy everything you want, you have to save money to afford wanted items (bakery, grill, jam maker and more).

So the first learning occurred was the ability to deal with money.

In HayDay and at level 18 you can join a neighborhood and she joined the one I'm in. Every week you and your neighbors participate in a derby, you choose and pick missions and when you have completed them you'll get points. The harder challenge, the more points.

Our racing horse getting as far as our points get him and it didn't took long until she understood, wanted to get the missions with most points and also compete with the neighbors. No one wants to be the last on the score table.

The second learning occurred was collaboration, even though you compete about the internal ranking you do help each other to fulfill those missions so you win the derby.

The third learning occurred at the same time: languages, while decode text and write own sentences. Same as in school, but now when there's rewards involved she challenge herself to the limits (it's a game!)

To some of the challenges, like the river boat, you get a hint what you'll need to the next boat.

Now you have to practice your skills in foresight and planning: can I prepare for the next boat?

This is hard for a 7-year old girl, it's usually something you should learn later in school and what my students, 10 years older, still struggle with.

The forth learning occurred was therefor math and the three mathematical operations of addition, subtraction and multiplication. Now the operations didn't stop at 10, as in school, but as far as she had plots to plant. Every plot gives also the double amount when you harvest.

And just as you this classic example of understanding multiplication you can create it visual by yourself inside HayDay.

In HayDay she has 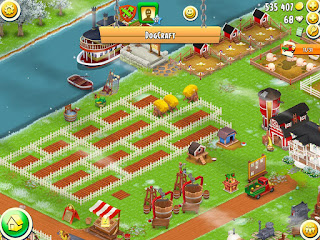 Our next learning project is the magic skill of foresight and planning.

Let's stay there at foresight and planning...
I had a discussion with a work mate the other week, as we both have connected our games to Facebook we're neighbors. I asked him what he have learnt of playing HayDay. Of course he hasn't learn a thing!

But when I had him to have that important second thought he actually came up with something brilliant:
Production chains

Hay Day actually teaches all the steps in the production chain! All small steps to a finished product, all steps are equally important. And, just as in real world, if you are unable to produce one or more steps, you can purchase that service.

Three months ago we were out on a field trip, we met a CEO that was looking for workers with the right mindset. Among other things: a positive attitude as well understand the importance of being a team player.

Team player with this example:
Even though you are hired to do one thing you have to be flexible enough to also temporarily jump to another spot in the production chain if it will be needed.

Where can you learn to understand the production chain for free and when it's fun...???
HayDay...
Upplagd av Kalle Ögland kl. 19:36 Inga kommentarer: