To learn coding without a computer

Just because we've been out of computers, Internet and Minecraft it doesn't mean we - AquaVera and I - have stopped thinking or been trying to learn new stuff. In fact, we've doing some exercises to learn computer coding as many thinking and coding approaches can be learned in off-screen activities.

iGameMom (games for learning) wrote a blog post about it some weeks ago (right in time!) and we started to break series of actions into small steps that someone who doesn’t have any background knowledge (like a computer) can understand and execute.

So, when building a Minecraft house, what do we do?
Well, according to AquaVera, soon 7 years old, it was easy: we build walls, roof, windows and doors.

This was our series of action that we needed to put into smaller steps as she, with a second thought, understood neither her uncle or grandfather would understand the concept without smaller pieces of instructions.

As we discussed the building phase in Minecraft (press E for inventory), choose block, place block (right click) she got tired of my stupid questions and streamlined the work: some tasks, which you do often, you can gather under one command.

She understood we have to get really small steps to make it working, but of course she also got tired quickly so we couldn't talk for hours, but some small talks here and there. Repetition and variation, when she started to think differently I also explained the larger context. It is possible to combine business with pleasure, that it doesn't need to be boring to learn something new, difficult and perhaps abstract.

Then, on a rainy day we started to play with LEGO. We had the instructions ready, now we had to test them - and first up: how big (tall) is the LEGO figure? It's easy in Minecraft as Steve is 2 blocks and the bed (as the door) is also two blocks. But what would it be in LEGO? Well, she understood it couldn't be 2 block but she estimated it to four blocks. 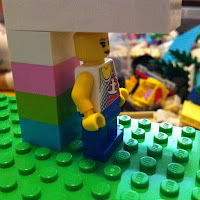 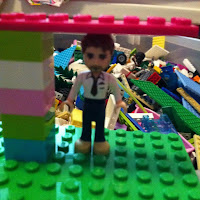 Five blocks!? now we had a problem as you can't cut a LEGO block into 1/2 (but in 1/3). OK, so now we also had to consider scale and sizes (math), and some nice discussions as we was playing as well.

First thing you have to do: find a nice spot!
And, as we now knew the guys are 5 blocks high we had to start think how long would the bed be? First she said we could use either 4x6 or 4x8 plates but when I gave her 3 red+1 white block (2x4) she decided all beds has to be 4x8 and when the red blocks ends we just use another color. 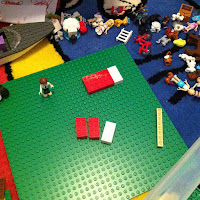 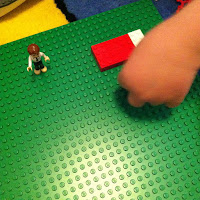 She gave me small instructions how to build the house and we had to build the bottom layer first so we could see how big the house would be. This was new: she usually builds wall by wall in Minecraft and no houses at all with LEGO. 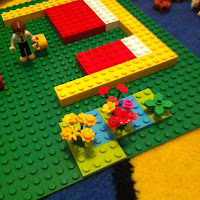 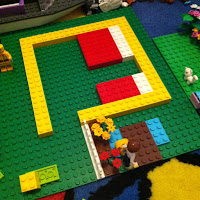 Of course or builders got hungry so we also had to put up a farm just outside... 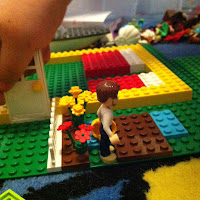 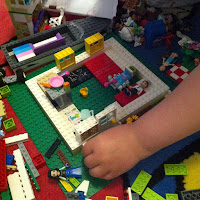 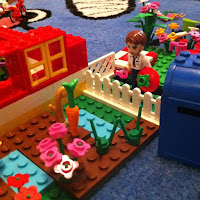 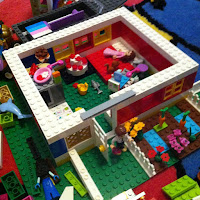 No roof is needed as we have to be able to move our figures in and out. As you can see of the last picture she also realized when we built the ground we had to make the house bigger so we could fit working bench and stove.

Another thing about the code learning. As she's learning to ride a bike we play Instructed Map Route where I'm the smartphone and she's the gameapp: She gets short instructions where to go.
Follow this road, take left, in the next crossing take right.
When she gets excited over handle shorter instructions and want to have longer ones she starts to mess up where to go and drives wrong. Luckily it's a small town and no cars on the roads :D 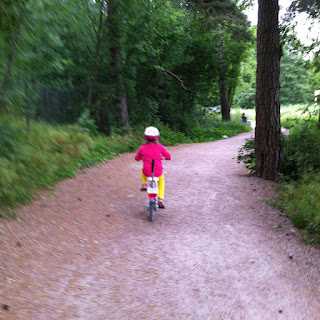 The latest thing we have started to do is to use a "secret language" which with the hama beads. In fact, the secret code is binary counting and the ASCII code table. Each letter has it's own 8-bits pattern with two colors (0 and 1). And as she got her uncles old iPad yesterday she needs to do something special in return I believe a hama beads cration with a binary message would fit like a glove! 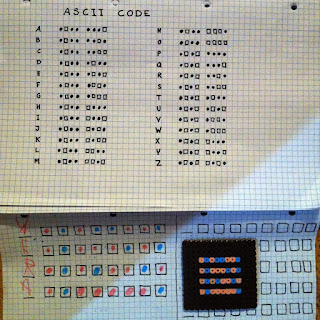 I've been out of both Internet and also workspace for the last month as we've been moving, but now we're back on the online track. Unfortunately I couldn't tell you the amazing news when it happened, but...
I convinced my principals that it's worth a try and I have some quests up and running, when the next semester starts we'll see how much work (and time) they have put into the game. And the easiest quest is very simple: be creative! You can't fail...