The "problem" we face with every day is that all students, one way or another, play computer games. And if your lessons isn't interesting or fun enough, they rather play. So therefor I try to take advantage of games as much as possible. And it's only a problem if that's your opinion, me myself believes it's an opportunity.

As our students needs to have 10 free of choice courses besides their vocational training to get their professional degree, I usually find my chances to run different projects within this field. I'm interested to see what learning occur when you use a game in education, that's why I have a chance to run "Economics with World of Warcraft" and two days ago (Wednesday 26th of November) I started a beginner's course to programming using #MinecraftEDU #ComputerCraft and #CCEdu.

Half of this group will later learn deeper and more advanced code (Java, Python, C++ and more). They all today play Minecraft (that's provided to be on my course). So during 7 weeks I will have them playing Minecraft and hopefully they will also learn some programming skills. The goal of this course is to learn how to crawl as the feedback Shane Asselstine gave me the other week.

My earlier experience of these courses you most likely will have like 6-10 students notified and half of them showing up. I got 20 and 16 turned up, good because I was a bit nervous about it, I only have 19 working computers in the lab...

Sixteen students between 15 and 17 years plus my daughter, 6yo (daycare ain't open in the evenings), a bit of a challenge I must say. But lo and behold! No matter the age difference, they had the same questions, got stuck in the same places and yelled the same opinions about Internet service provider, who of course had a lot of trouble nationally in Finland yesterday afternoon and evening. My daugther, AquaVera, tried the intro to turtles stage by her own and showed the most stubborn student how easy you could make (and learn) code. 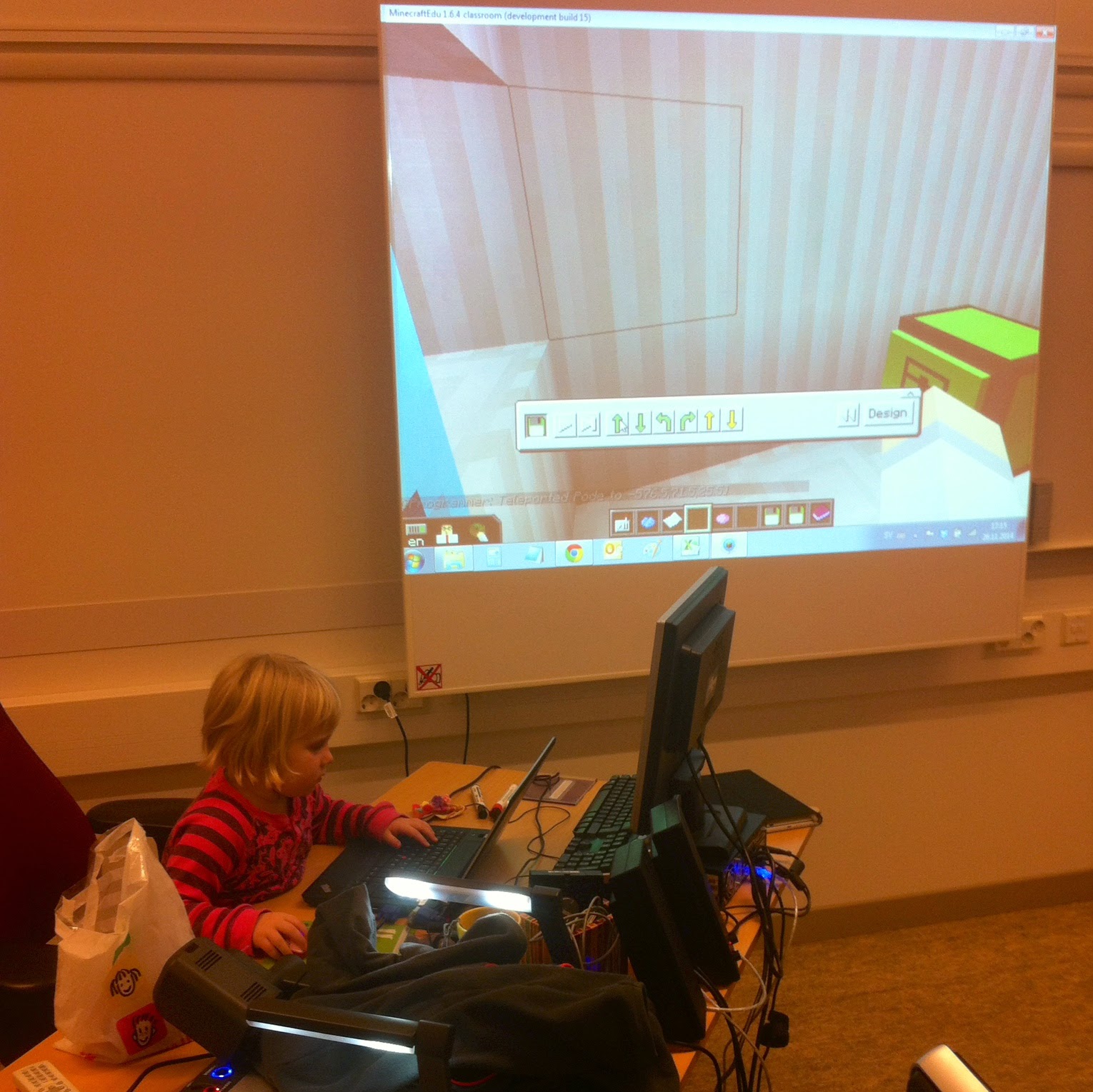 My masterplan this time is to first have Introduction to programming with the Land of Turtles world, created by Michael Harvey (can't give him enough credits for the map or hos patience with me). When we have finished the challenges there we will move on to a survival #MinecraftEDU #CCEdu server, I do believe Shane Asselstine when he says humans are lazy of nature. After the first days in game the students will think how to use turtles to do boring stuff for them: chop woods, find minerals, guard the house and more.

The goal of this course is to learn how to crawl (basics of programming) and practice on the key competences of lifelong learning. Nothing more than that, but I do believe that's enough. You see, after only one session (Wednesday) some of the guys started to think how to use this new skills at their own class server and it turned out they now have password protected doors... 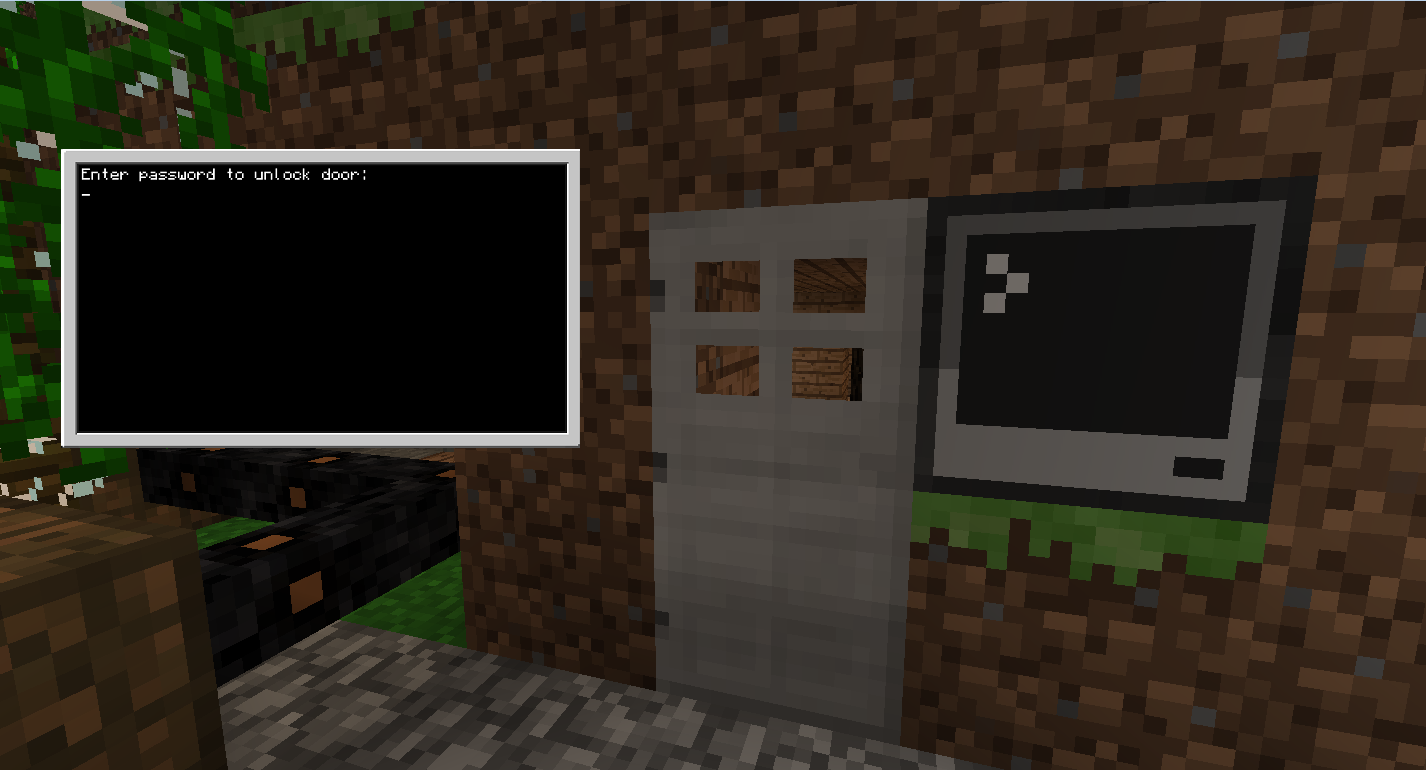 Something they admit not been thinking of before we started the course, and even though they copy-paste the code from a FAQ there still is a learning process going on, and it still very funny (for us both).

Because of the problems ISP had I also told my students after 2 hours they could leave and go home. Six students refused to leave and sat the whole time even though they were kicked out every 10 or 15 min. One student I also had to kick out from classroom because he didn't want to go home at all... And he was very pissed I didn't get him a chance to finish :D

Indeed, they do learn in another way.
A way we're not used to or fully comfortable with but instead of deny it we could take advantage of it, control it (the gaming) and use it. Something to learn here, right? Well, as this awesome blogpost points out, at least we (teachers) can learn five things from video games:

One of the lessons I've learned of using the map, the Land of Turtles, is I must slow them down and force them to take time in the museum and force them to analysis an own piece of code. Both because everyone has problems to log on the first time and if they don't have it themselves, we have problems with the computers. So I usually share a document as they rarely read (see above and rule no 1) but also a code example they have to find, analysis and describe what it does. And I also block the entrance to the basement and portal.

When using Minecraft in education you will have lots of problems if you're using mediation pedagogy and instead you have to focus on motivational pedagogy, to be a fellow traveler as well as the travel guide so your students keep the focus.

"Your class eat, sleep and shit computer games!"
I am so sorry, I can't see the problem.
Not really.

Yep, today one of my colleagues came and told me that my class eat, think, sleep, breathe and live computer games.
Yep, so what?

"It's evil!
We have do ban it!
We we must introduce a total ban of computer games in school!"

...because that is working today?
Or not?

I tried to explain how you can be a professional gamer and earn great money, but when I looked in my colleagues eyes I realized I had crossed some kind of a line there...
"YOU CAN'T  MAKE A LIVING AS A GAMER!!!"

I have a simpler solution:
Because you have already analyzed the situation so well, why don't you change your didactics? Instead of fight the computer gaming, why do not take advantage of their interest? As you already have figured out, they learn in a different way...

I got proof of that with a discussion yesterday with some students who believe the programming courses is way over their top. The only time when they actually did learn something was when I had them play MinecraftEDU using ComputerCraftEDU.

After one day they said they had finally learned and understand the WHILE loop.

And I got a proof yesterday they still remember the WHILE-loop because they told me their whole programming courses can be summarized as a WHILE-loop... 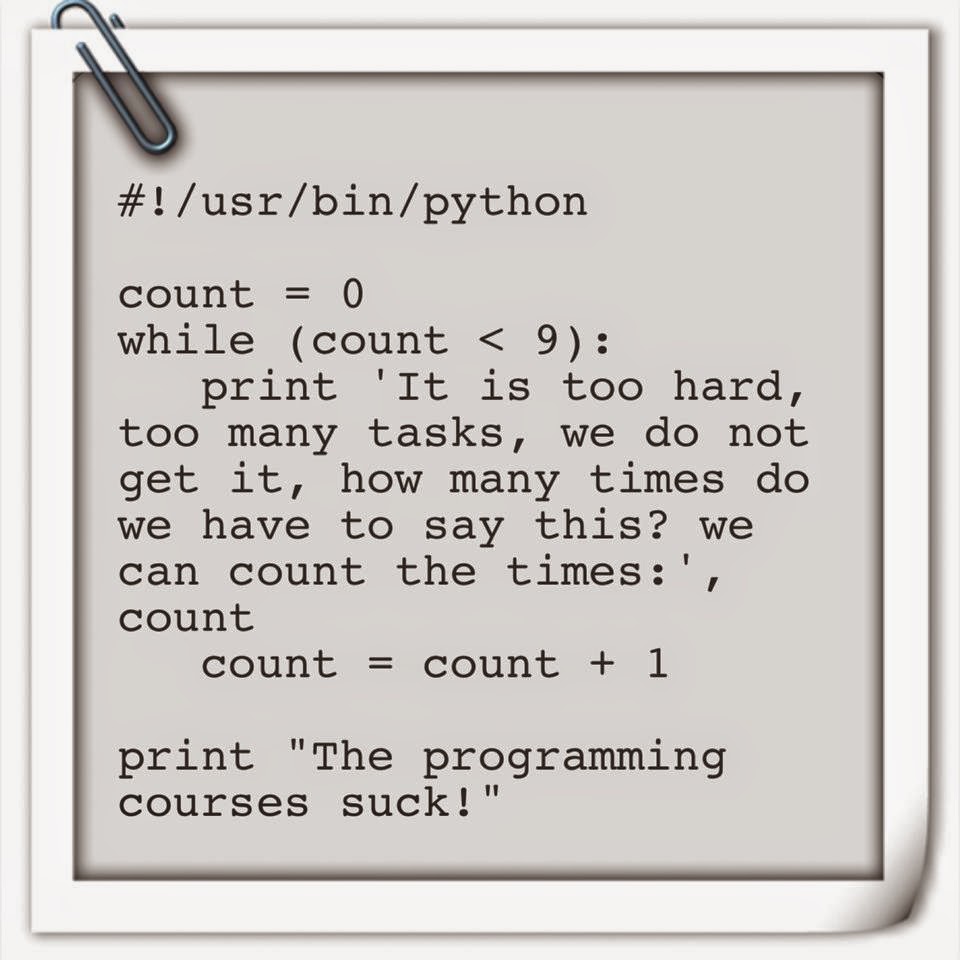 It's a fight you can't win.
Accept the computer and video games.
Take advantage of it.
Improvise, adapt and overcome!

A small step for man one giant leap for mankind

Close.
Or I maybe should re-write it and give you an updated version of it.
A small step for students one giant leap for (our) school.

What have happened?
Some colleagues of mine has started using gamification with support from one of our principals, who eagerly awaits a result of those courses.

But of course, I havn't yet told them the name (gamification) of what they're doing, we can't rush into scary things like such words. They think they're using games, I believe they use game mechanics in class.

Didactor is such an awesome tool, with 14 game generators in one web platform! And without have it a second thought what triggers the students my colleagues are amazed, surprised, excited and totally blown away of the students results, feedback and commitment!

Gone is the photocopier, with scissors and glue to make last minute exercises. In goes web-based teaching and self-correcting test. This is one of the benefits without losing control: as the teacher makes the exercises we also do the keys. With other words, we still have the control! ...and that's something very important to a teacher.

Yesterday they, both my fellow teachers and the students, had their debut using Gamification. Both parties were blown away! None of the students got tired and fell asleep, all were active throughout the day. Teachers were finally almost force them home, because they "just would beat the record"...

My niece that I try the same thing on, put it so well:
"Learning without really thinking about it!"
Because it's FUN.

Both colleagues was so surprised they couldn't stop talking about the experience, and this is what they told me:
"I am so excited that the students were eager, I hope it lasts!"

"A big Thank you! Without your efforts I would not have even heard about Didactor!"

And this one was the best, the comment that gave me chills:
"It was my best day in years!"

Conversations with the youth

The other week I was back home in Sweden, met my family and of course talked with my nephews about school. Well, not exactly what happens in school, but how they perceive school.

Have the Swedish school managed to use the new technology in a, for the young, attractive manner?

That was an interesting talk, I must say. It was the counterpart to their schools tech ambition with advanced technology that usually only can be found at a University.

By the way, both two nephews had an ongoing punishment of the modern parents attitude to games: computer games banned!!!
Hey parent! I got news!
They are playing anyways, they've smarphones as they play on instead. Same games by the way... ROFL

If they anyway play videogames, why don't use that interest to something useful? Education for example...

Okay, I was curious, so I kept asking until the nephews whispered: "don't tell mum, I play a lot, even during class when it's too boring..."

Interesting.
They behave in the same way as my students...
Coincidence?
I think not.

So why not using that interest and use it in education?

For example, use a plattform as Didactor and see what happens.

I felt so sorry for my niece (16 yo) that I made a special course, for a test, using the tool Didactor and three funny things occured.
And by the way, a colleague of mine has started using Didactor today in the practical nurse education, and as a result using games in education she has halved todays lessons... and they already on their way to do the first test, three lessons before the scheduled time. She was surprised, excited and overwhelmed! My colleague reported two things
The other one, my nephew 13 yo, told me his school has such an advanced robot the other one is at a University. They trying to make code to it. It feels a bit to start in the wrong end...
Really?
13 yo and start with a University technology?
When he loves Minecraft?
Sounds like computer craft would be a better choice for the target audience...

Yeah and how could I forgot?
What do I know? "You're not even qualified teacher!!!"
No. Not yet. I'm working on that part...
And in addition, that was a pretty lame excuse for not listening to the young people...

About Didactor
Yes, I know there's a couple of other platforms which do exactly the same things but as I tend to go for the KISS-way I rather pay to get a working solution with a clean nice interface and a low learning curve. Look at paragraph 3 above, starts with "her mother, the teacher..."