The Finnish vocational education consists of 75% vocational subjects, 17% joint (eligibility for further study) and 8% subject courses to choose and who should strengthen your career choice. Within the last 8% I usually find opportunities to give courses with other and new methods such as math in Minecraft or business in World of Warcraft.

During this school year, I have had rolling minecraft courses in order to practice on key competences for lifelong learning and as my principal didn't know what to call them (the courses) we named them "Math in Minecraft". But, like my colleagues, students have difficulty connecting games with learning and they have become very confused when I asked them to play together toward a larger goal, like building a nuclear plant (Industrial Craft) and you'll learn math, language, problem solving while playing.

To force them to collaborate was a too hard task as they came from different classes, as well as to see a bigger goal. Even though they are between 16-18 they have big difficulties to see the whole picture, to understand the chain of what it takes. You have the soldier for example, one soldier in the army requires 10 workers that will make sure he has food, armor, weapons, protection and so on.

Lesson 1:
Don't think that they are already adults, give them small targets to work towards.

One day when I'm was in the final stage of the fourth round I had to give them a homework assignment. I used Google Form, gave them a mission "compare the time it will take you to dig to the bedrock with and without equipment (food or weapons). Count how many times you die as well as all the material you mine". And suddenly they started working and also requested more assignments.

Lesson 2:
As they can't see how you learn with games you have to choose the boring way to make them work, make them understand, give them a form to fill in!

So to my final course I created a scenario (with some help from my friend Spelläraren), a plane crash! You have to survive! All you got with you from the aircraft was a broken radio: you can receive messages but not send. 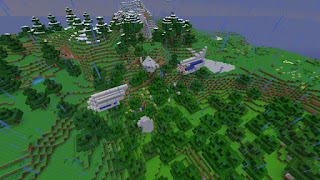 The plane crash! (course site and hopefully Google translate works)
I managed to find an old news story about a plane crash in Finland that I started from, and from that start I would - on a weekly basis - try to push the plot forward. The angle of this course was to get students to understand the coordinate system where many have difficulty understanding 2D (X and Y axis) but easier to understand 3D chart Minecraft (X, Y, and Z axis).

The students have thought I've been crazy, how can I learn math from Minecraft? But this note might bring some brightness? 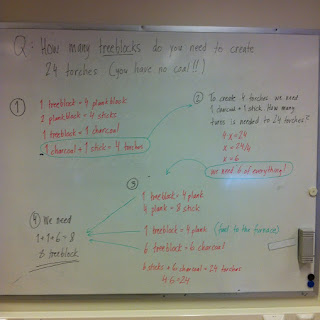 During the course, I lost the motivation multiple times because my students did not give me any feedback and I was not sure if I did the course in this way for me or for them.

Unfortunately, there was a course with few close study hours, and therefore it was not more than six missions, five of them with the help of Google Form and the sixth to reach the goal and inside the game write a report (with book and quill) and answer the questions:
So first when the course is over, I've had them to start reflect what they have been doing. Voilá! You've been doing math all time! 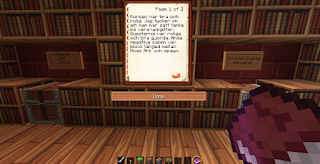 And now I got the feedback, they had all liked the way of how I challenged them - but sometimes they thought I had a bit too long distance (too many blocks) between the missions. My thought had been that they would be much more active, move more, sneaking up on each other and also to move forward in the direction I decided.

Lesson 3:
It not only helps with a story line but the students also appreciate it! 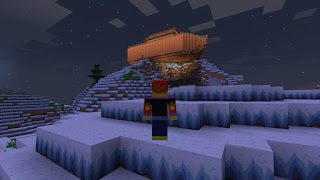 Just because PvP was allowed doesn't mean that it's the smartest solution to solve all conflicts. With MinecraftEDU it would have been easy to separate the warring parties, have a discussion, and get them focus on target (to be saved). Instead, they spent four lessons with trying to kill each other and after that day, they realized that they had not come any closer to the goal and that day was a waste of time.

Lesson 4:
Try to keep them busy! Then they don't have time to do something else.

One of the problems they had to solve was something you could either test inside game or draw a scheme of:

If you manage to catch two animals you can get them to mate by feeding them. Cows for example, you feed hay (wheat) and two animals can have a child every five minutes and it takes 20 minutes for a baby to grow up. You have two cooldowns to keep track of.

Multiply 2 animals maximum of 30 minutes, how many animals do you have when the time runs out?

Conclusion
This course form worked and I will continue to use that. You shouldn't get too many math task, the fact is less than half will be schoolstuff and the rest must be games: "keep the illusion alive" (as spellararen told me).