The product: the lustful learning

As a remedial teacher I usually gets those students who have one or more challenges (I refuse to say difficulties or problems!). Now I help one student and the more I talk with him, the more I start to wonder why we - the school system - insist on teaching like it would be 1980 and not 2016. Even if the Internet didn't exist throughout the teacher's life, there have been in our students' whole lives.

This one student is judged by the 1980's methods and therefore he possesses not what the knowledge society requires. If you, on the other hand, use the methods of 2016 he actually master the skills needed more than many else.

According to traditional values, he has an abnormal and unhealthy interest in video games and no matter what he does, they consider it as dangerous gaming. Still, traditional thinking, he needs help and support in mathematics, physics, languages, social situations. He can't handle money (he doesn't understand the value of money), can't hold times, can't think logical, need a calculator and the list goes on and on and on...

When I first met him, the Fall of 2014, he was top 20 in the European league of "World of Tanks" and besides that also second in rank in his clan (including set up strategy's, handle price money and be the ambassador). Now, he has stepped down from the active gaming and instead run the whole clan by himself.

Just to check if he was aware of what he's doing I showed him the school's organizational chart and asked him to tell me, based on this, how his organization looks. Hardly surprising, he placed his organization in the right places; CEO, deputy CEO, management, economy and so on. He also explained how he pay wages (in game money) to his whole clan (approx 75 people), the bonus system he use for unsocial hours (if they get attacked for example 04:00) and more. "doesn't understand the value of money"!? What a rubbish nonsense!

But today, 2016, the school ain't ready for those students so therefor we're back at square one. Here we need the remedial teacher (me)...

According to regulations I should ask the owner of the course (who use traditional methods) about course content to use on this student to help him understand the things in an outdated view. To clarify: it is not up to me to interpret the curriculum.

But now it felt so wrong, I over ruled the regulations and went to my supervisor and asked; do I help this guy as the individual teacher wants or can I interpret the curriculum myself?

For the record, it's very clear in the curriculum what you need to know so there's no law broken, but different interpretations juxtapose.

I got the decision: interpret yourself as it won't work otherwise.

Now, to my lot, I have math and physics. I would actually have to have even the language, because if you're not from the start English-speaking, you become it through computer games.

And here's the funny thing; when you use games in education, you not only teach one course at a time. You can combine, you can do both, you can learn more, you can learn faster and suddenly you also have the lustful learning. The desire to learn and the desire to understand.

Because it's fun.
The environment is safe; therefor you can relax and start to learn.

So math and physics.
And Minecraft.
Because Minecraft is "AWWSOME!"
Even if you're 18 years old.

To be able to solve the physics we have to start with math. And survival (great choice!) as it's more fun. Yes, more fun and math is present all the way! 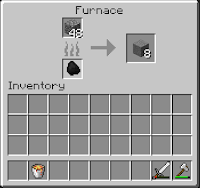 Next examples are my own, not from the book!
But next one, according to the reports, he would need a calculator: How many minutes is 1000 seconds?

In his head he calculated 16 minutes.

He continued: "if we assume I can fill/empty the furnace constantly I will get 100 iron ingots after one lava bucket, as the burning time for one ingot is 10 seconds"

Now the idea is that we should do the physics part: velocity calculations and for that we have created racing tracks. We will measure how long it will take to walk, run, ride horse, swim, use boat and use minecart for 100 blocks (100 metres). We have already talked about cars speed, your walk speed and so on, but next week we'll figure out how to also do the calculations.