AquaVera has started first grade and they have homework every single day. In addition to mathematics and spelling, they must also practice reading for at least 15 minutes.

But as the language they learn is Finnish (which I struggle with) my wife (AquaVera's mother) does that part. Yesterday I started to thought how I could help, relieve my wife and give my daughter another way to practice.

Minecraft.
How can we benefit from our gaming interest?

First I tried this and failed:


Instead, I started to make those animal pens. The keyword with both uppercase and lowercase letters and in her (second) mother tongue Finnish.

She began to spell out the word, pronounced each letter and put together words. The reward attracted, it was something as simple as put out the right block in the animal pen. 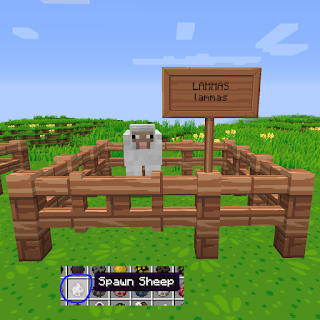 With traditional methods she was learning one (1) language, with game based learning she connected three (3) languages! The Power of Minecraft...